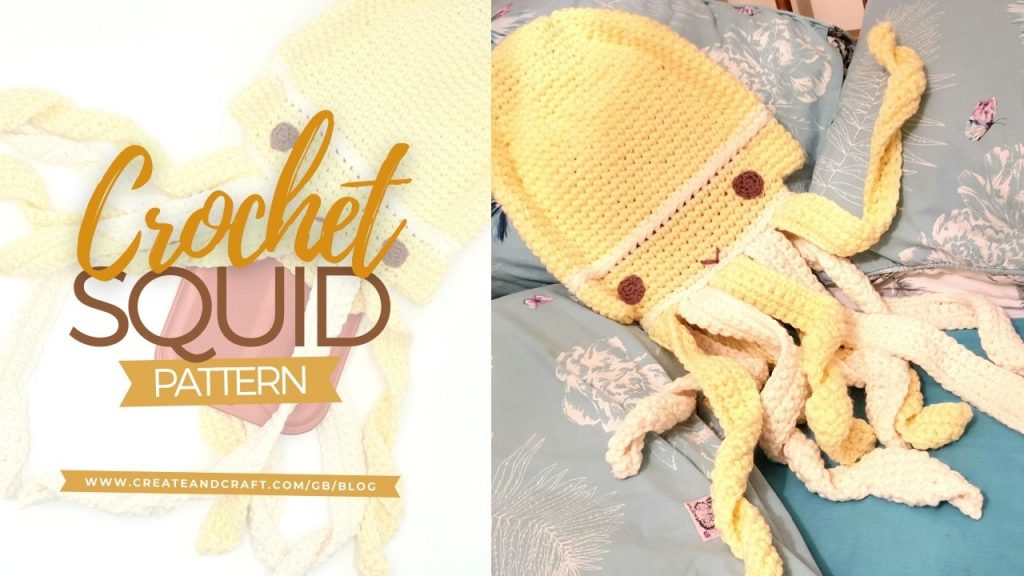 This super cute crochet squid is the perfect pal to cuddle up with on darker autumn evenings… and as the temperature drops, you can add your hot water bottle for extra cosiness! Check out the clever Mandy Cameron’s step-by-step crochet tutorial and pattern below, and learn exactly how you can create your own.

Top Tip: As the spiral method is used (no joining with a ss or making 1ch to start round), place a stitch marker at the beginning of the first round and move it up every row.

With lemon yarn, make an adjustable slip knot and 2ch.

Rnd 30: bpdc all round, fasten off cream and sew in ends

Rnd 36: Miss first 4sts of next round (total 8 missed stitches counting those not worked on round 35). 1dc into next stitch and following 19sts, miss 8dc, and work 20dc to finish at marker (40sts). This is now the beginning of round.

Rnd 38: Bpdc around, fasten off cream and sew in ends.

Continue with using lemon yarn and working in rows from this point on to create enclosure flap.

Fasten off, leaving tail of yarn for sewing to body. Fold the corners of the other end together and sew in place to create a small rounded end.

Fasten off leaving end for sewing to body.

(Looks like it would be used as a hand.)

With cream yarn make and adjustable slip knot and ch9.

Fold the corners of the wide end to meet, flatten so join is in the centre and creates a curling edge, and sew edge to cream tentacle above.

1ss into next dc and fasten off leaving tail of yarn for sewing to face.

Sew hook and loop fastening (like velcro) to enclosure flap and inside body to secure closing and keep hot water bottle in place.

With hot water bottle inside, use a running stitch up and down each side to create the side fins.

Place one yellow arm in centre front of body, and sew in place under the lower cream line; this can be hidden under the ridge.

Place tentacles either side of this central arm and sew in place. Alternate the remaining arms in colourway around the body. Each arm has 4 rows and these can be matched with 4dc to create even placement around. ( 40dc around the body, 8 arms and 2 tentacles giving them a space of 4dc each for placement).

The arms and tentacles will naturally twist. If you want them straight, you will need to block them.

Now your super cute, super snugly crochet squid is complete, you can warm him up, ready for a cosy night in!

Want to check out the rest of our crochet ideas? Discover all our free patterns and projects right here.

As our content marketing executive in charge of the Create and Craft blog, Lisa loves nothing more than writing about all things craft. ‘When I’m not at work, you’ll find me attempting a wonky crochet project, playing with watercolours or trying my hand at the latest awesome craft tutorial to cross my desk!’

Latest posts by Lisa at Create & Craft (see all)
Crafts