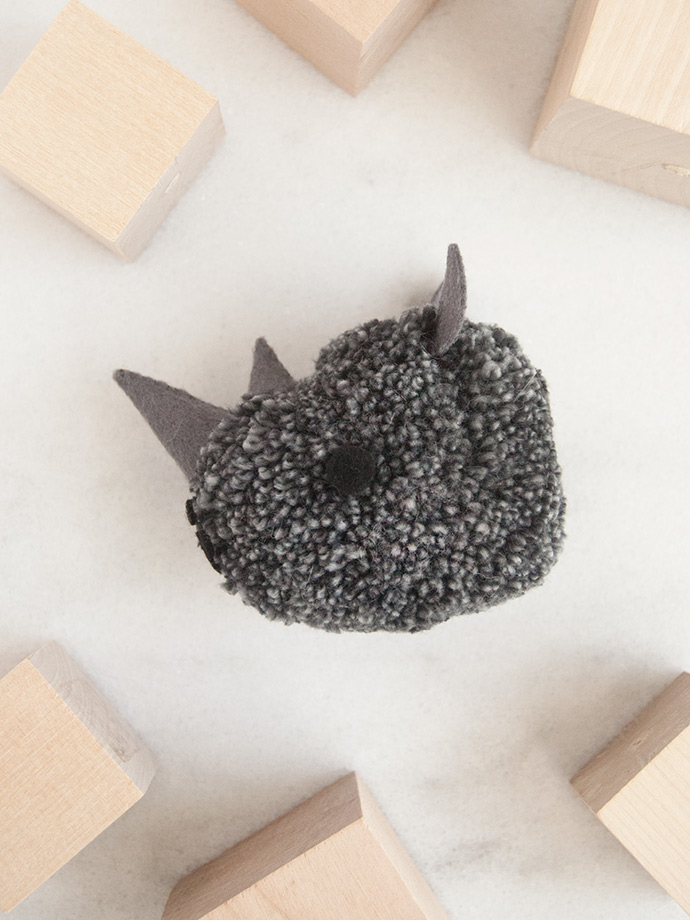 Today we’re excited to be making a pom pom version of the black rhino for the latest post in our series of endangered animal pom poms with Purl Soho! The excellent news is that the population of the black rhinos has been steadily increasing over the past few years due to conservation efforts, but these big guys are still critically endangered mainly due to poaching. There are currently about 5600 black rhinos in Africa and we hope that this number continues to grow! Keep reading to learn how to make your own mini black rhino, and what you can do to help below! 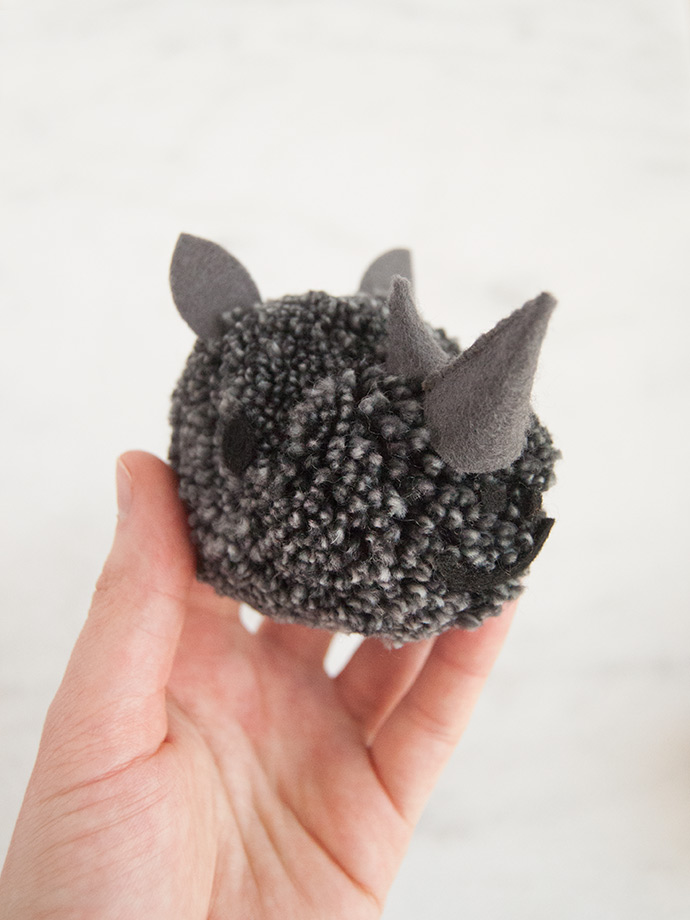 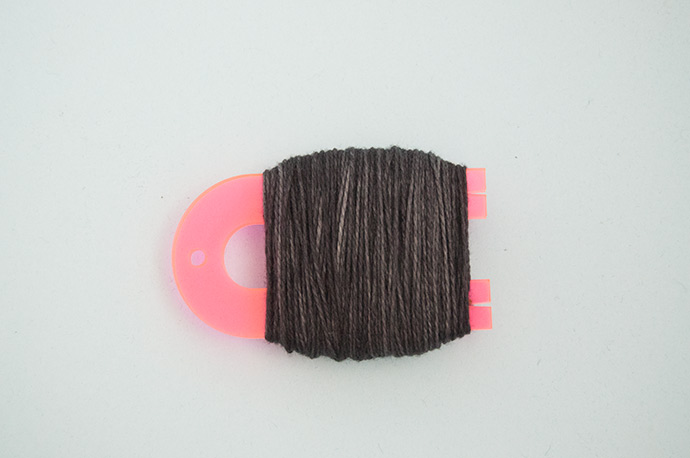 Step 1
Wind your skein of Pocket Posey into a ball. If you’ve never done this before, Purl Soho’s tutorial on this is super helpful! Once you have a ball of yarn, wrap it around the large pink pom pom maker. For a nice, dense pom pom, you’ll want to do 300 rotations at the very least around the maker but we used the whole ball to make it as fluffy as possible. 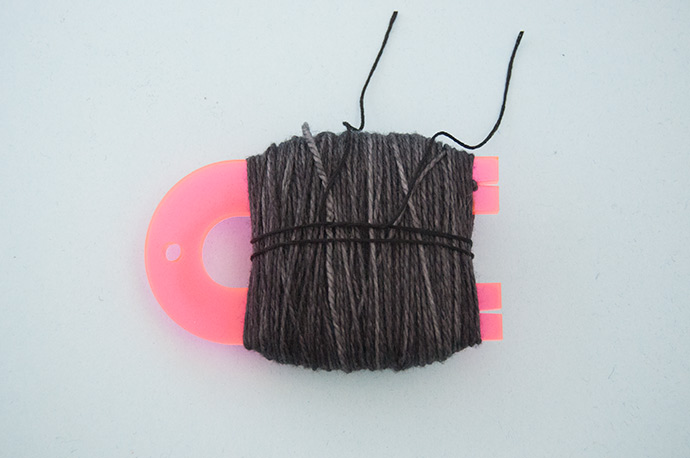 Step 2
Once you’ve wrapped the yarn, cut an 18″ piece of embroidery thread. Thread one end through the U-shaped gap between the wrapped yarn and the pom pom maker. Bring that same end up and over the wrapped yarn and then back through that same U-shaped gap again. Bring the two end of the embroidery floss together and make sure that the horizontal threads are nice and centered on the yarn wrap. Tie a surgeon’s knot but wrap the end through the loop twice. Pull the knot but don’t pull all the way tight just yet. 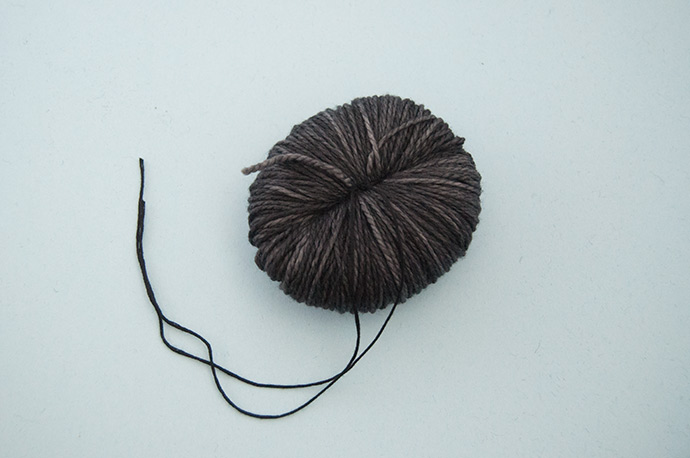 Step 3
Gently slide the yarn wrap off the end of the pom pom maker. Pull the embroidery floss knot as tightly as you can. Use a finger to hold the surgeon’s knot tight in place and then tie a half granny knot on top to secure. Bring both ends of the floss to the other side of the wrap (make sure to do this so that you don’t catch any loops of yarn along the sides) and then tie another tight surgeon’s knot, followed by another granny knot to secure. Make sure that these knots feel secure and very tight – a loose center may cause your pom pom to fall apart later. 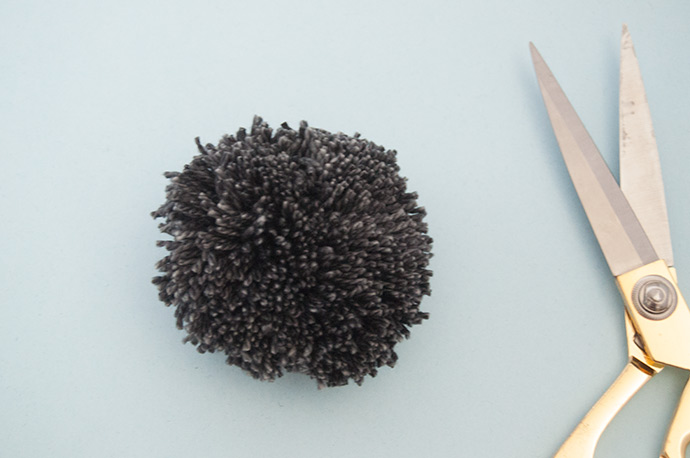 Step 4
Use sharp scissors to cut all the yarn loops. You’ll now have a kind of shaggy looking pom pom like this. 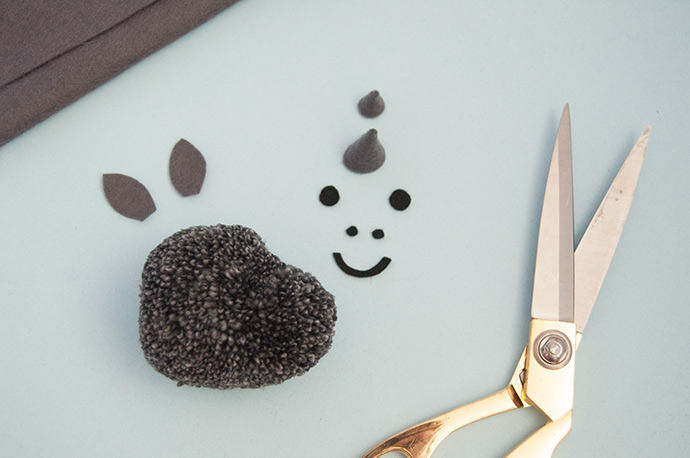 Step 5
Use your very sharp scissors to trim down the shaggy pom pom into the shape of a rhino’s head! It helps to do an image search on rhinos for reference when doing this – we found looking at illustrated rhinos was helpful too! Once you’re happy with the shape of the head, it’s time to make the felt details. From the black felt, cut out two eyes, two nostrils, and a smiling mouth. Cut two teardrop-shaped ears from charcoal felt, and we’ll use this felt for the horns too. 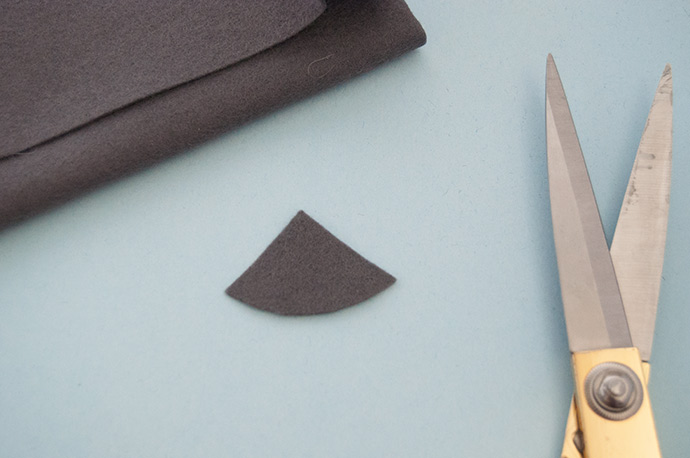 Depending on the finished size of your rhino’s head, the wedge you’ll cut from the charcoal felt will vary slightly. Start larger than you think, roll it into a cone and hold it in place. Trim it down until you’re happy with the size and shape. Black rhinos have two horns, a larger lower one and a smaller upper one, so make sure to cut a wedge for each horn. 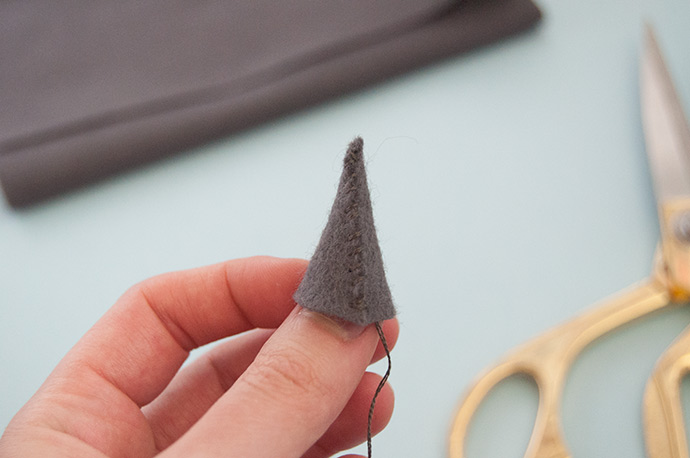 We used a needle and thread to sew a simple line of stiching to secure the felt wedge into a cone. Just do tiny stitched and make sure to tie off securely! If this is too advanced for littler crafters, you can instead do this step with hot glue. 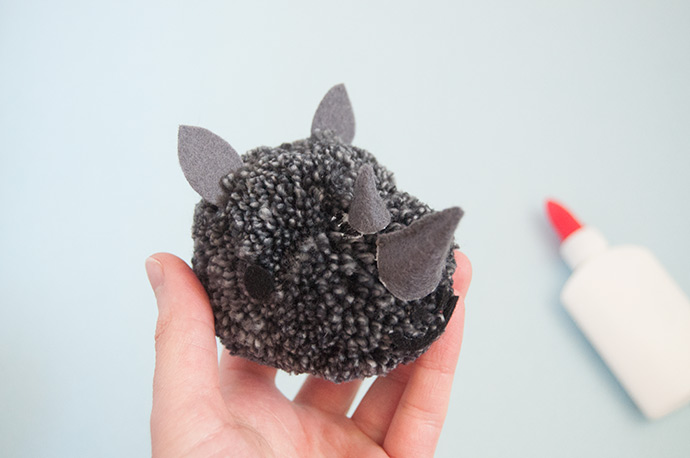 Step 6
And once all the pieces are ready, just glue them onto the head and let dry! 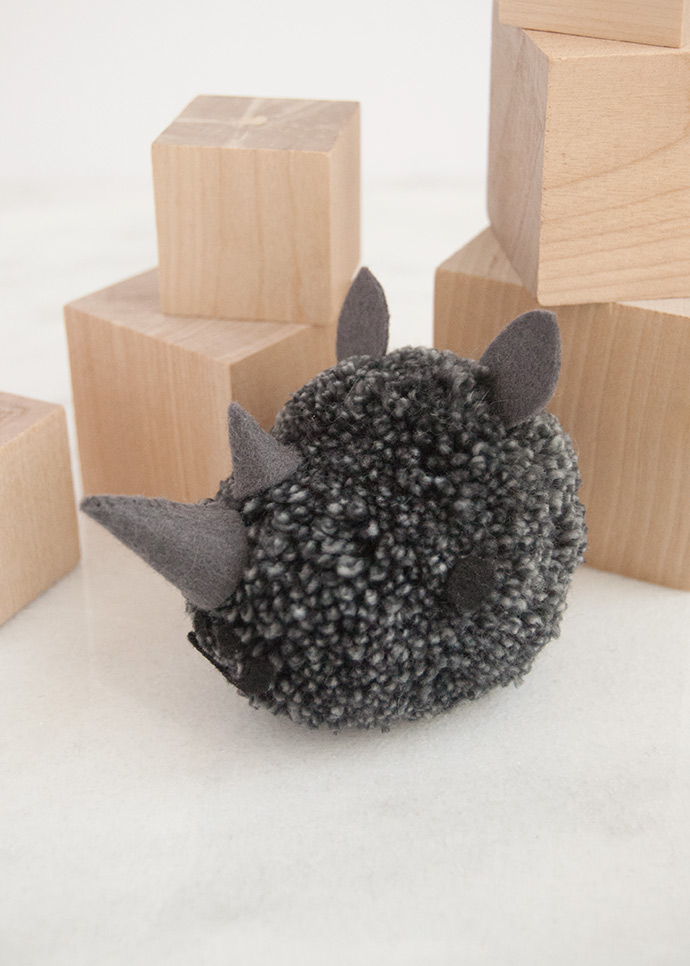 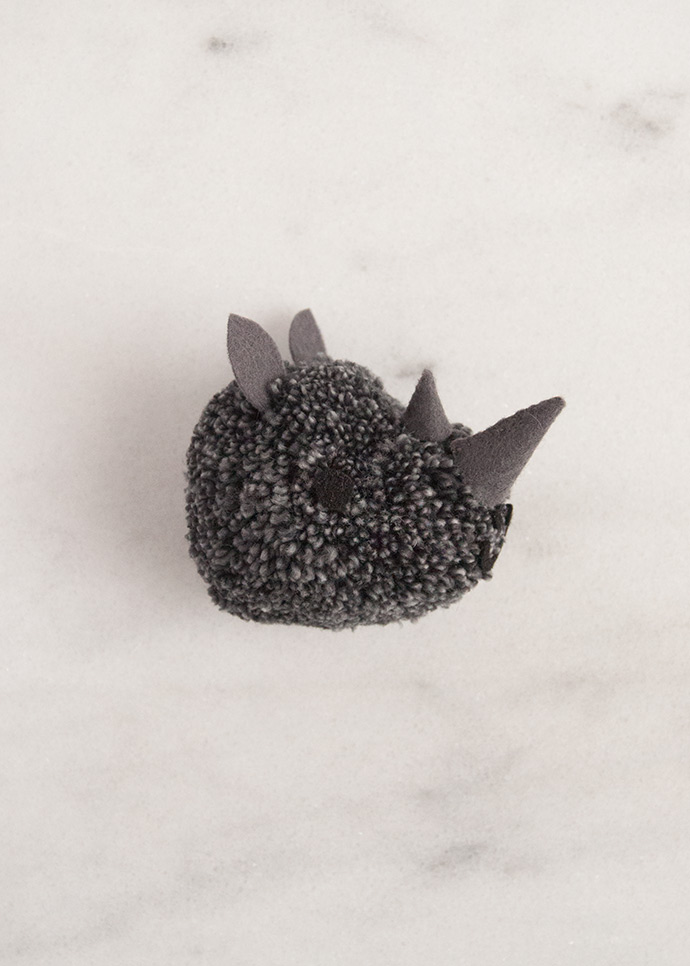 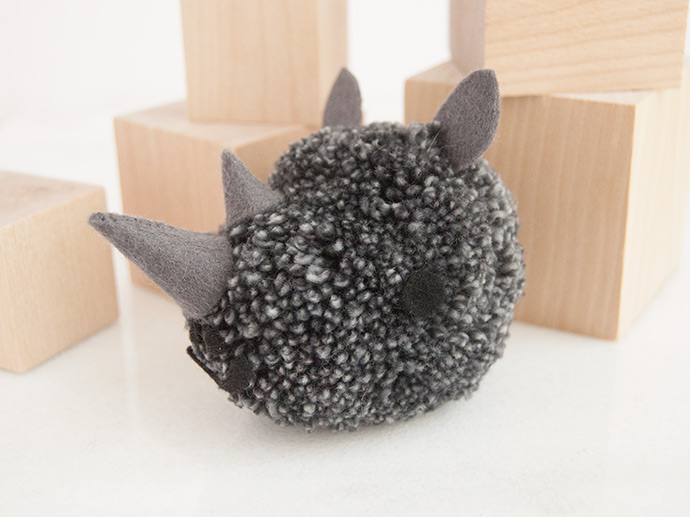 Click here to learn more about the black rhino and how you can help conservation efforts! And stay tuned for the final three endangered animal pom poms in the coming months!
Crafts